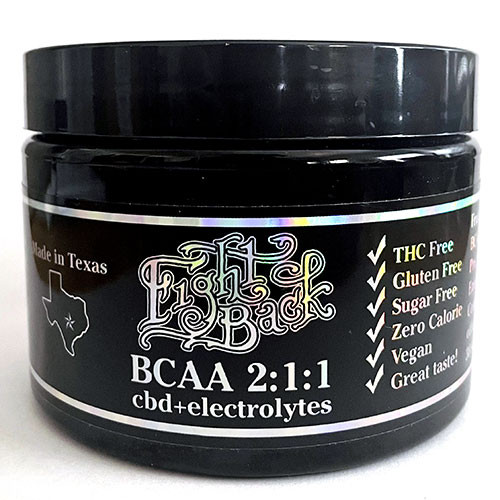 Here it is! I've had this idea since day one, its just been a long time figuring it all out! 30 servings per container, 600+mg CBD, min 20mg per serving. includes a FREE SCOOPIE ($5 value) to make it super easy to fill your water bottle. Get a healthy scoop, close the lid, dump it. EASY!

BCAA+CBD+ELECTROLYTES. BCAA has been shown to reduce muscle fatigue and soreness, increase muslce growth. I take BCAA as a preworkout before rolling and I feel liek it def helps me to be less sore and tired in rolls and increase my stamina without the jitters of caffine. This mix has electroyltes to help hydration.

This can be use pre, post or druing workout, just like any other sports drink. PLUS CBD!

BCAAs have an insulin-like effect on glucose, causing a reduction in glucose levels. BCAAs that are ingested before exercise can be oxidized by skeletal muscle and used as energy during the exercise, reducing the need for the liver to increase levels of glycogenolysis. During anaerobic exercise the pyruvate molecules that result from glucose metabolism are converted to lactic acid, the buildup of which can lead to metabolic acidosis with pH levels as low as 6.4.[26] High levels of lactic acid cause glucose metabolism to stop in order to reduce further reduction of pH. BCAA supplementation has been shown to decrease levels of lactic acid in the muscle, allowing glucose metabolism to continue.[27]